Yep, it's finally there. A new design for the home of Mojo. After months and months of not-starting on the site, I finally decided that I would never going to build the damn thing from scratch. Lucky for me, a good friend of mine suggested I should just choose a theme. That way, I would have a great starting point. So that's what I did.

The next mistake was that I wanted to develop my own comic management code/plugin. I felt that ComicPress or Comic Easel had too many features I didn't need and I didn't want to have to rely on third-party plugins like Comic Easel. So I (sneaky) downloaded Comic Easel, dove into the code of Comic Easel and started to rip out the parts I didn't needed and copy and tweak the parts I could use. But last night - after a couple of hours copying and rewriting code - I suddenly realized how stupid this approach was. Comic Easel works and is build by someone who knows what he's doing. So why should I invent the wheel all over again? Why not use Comic Easel and have peace with the fact that it has more features than I currently need?
So I removed all my copied code, installed Comic Easel and within 20 minutes (!) I had everything up-and-running on my local webserver.

I had to do some tweaks here and there in the theme, but this afternoon I decided I would just put the first version online. I started uploading all the new theme files, adjusting the database, run the ComicPress-to-ComicEasel migration tool and it all looked fine. Until at some point I noticed there was something missing. Somehow all my non-comic posts were gone. WTF! No idea what happened. I probably made some mistake along the way, but still have no idea where. And the worst part is... I did NOT made a backup of the database before I started to adjust everything. OMG!

But luck was on my side. I had made a database extract last night, because I wanted to have the same data locally for testing purposes. I did made a backup, by accident. PHEW! So, I removed everything, installed a fresh new copy of WordPress, imported all the data and I let the ComicPress-to-ComicEasel migration tool do its job. And finally the new site was up and running.

I'm very pleased with the minimalistic approach of the site. I like that the blog and the comic are separate pages on the site now. And, the site is also responsive. This means that if you check the site on your mobile device, it should scale properly. Yeah, nice nice. I still want to tweak the colors and styling of the site a little. I used the Fluid theme, but since I have stripped out a lot of the portfolio items, it's pretty clean/minimalistic now. I still have a lot other additions in store for you guys. But you'll all have to wait and see.

I would love to hear what you guys think of the new design. So, please give me feedback, because... the site is also 49% your property ^^

Last comic (the current one) I worked hard and forced myself through the pain in my back. But now I don't think that was very good to do. So sorry guys, no comic update today.

I really feel bad for not having a buffer. It feels like lack of professionalism and like failure. So when this is over I will start to work on a buffer.

But here is a short comic-ish update: 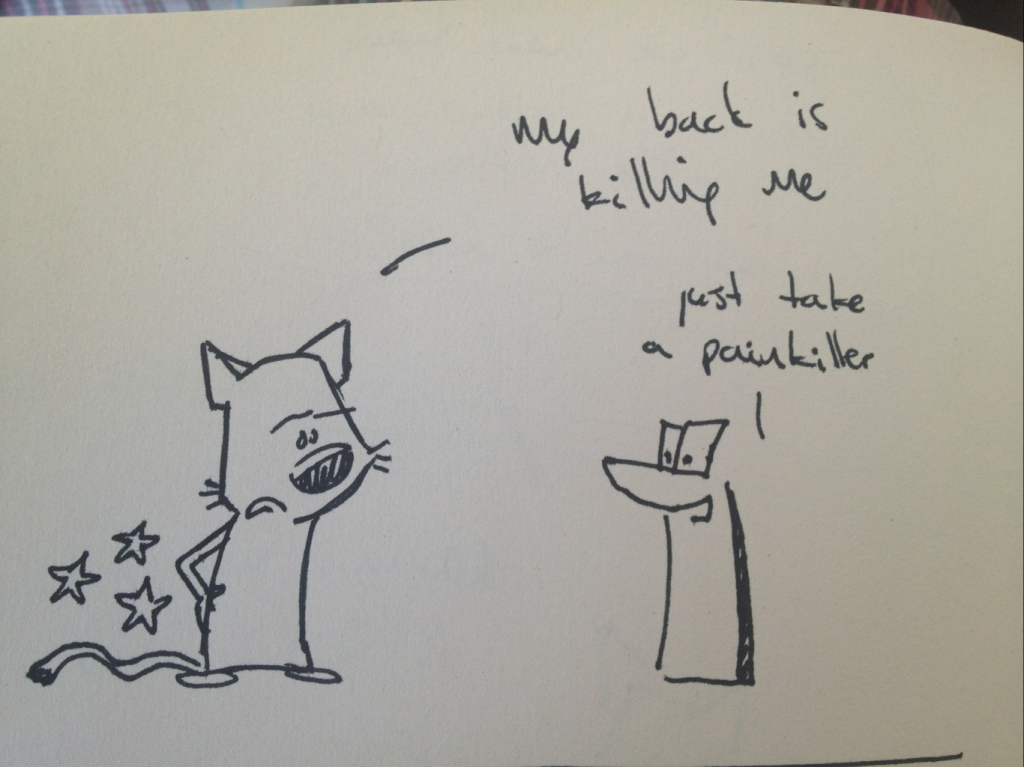 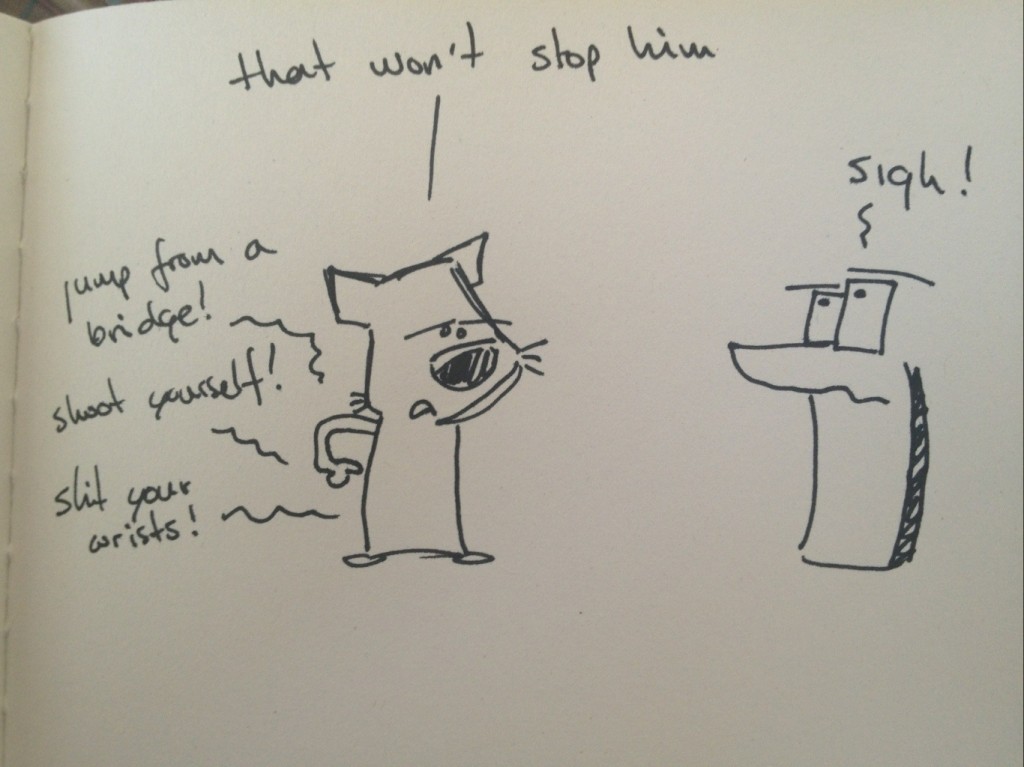 Let me start by thanking all you guys for the comments this month. Last month I got interviewed by the nice guys from Comics Coast to Coast. If you haven't heard it, listen to the Mojo podcast. I also started to work on the redesign of the whole website, but due to my vacation it hasn't gone as fast as I'd like.

Congrats Bearman, please send your post address to skar[at]mojocomic[dot]com and let me know what character you prefer.

Interviewed on Comics Coast to Coast

There are a few webcomic related podcasts out there I listen to regularly. Comics Coast to Coast is one of them. I really love listening to the guys over there talking and having fun. So I was really honored when I got an invitation to be a guest on their show.

Last Saturday we all sat together. Me in my bedroom, on the bed, with my laptop on my knees and the guys on the other side of the plane,  all in their own spots and we'd talked for more than one hour. We really had a great talk. Too bad a part was lost due too bad audio quality... but most of the interview has been put online.

Check out the podcast over here: http://comicscoasttocoast.com/episode-141-the-oskar-van-velden-interview

Thanks Brian, Joel, Matt and Denver for giving me the opportunity to talk about Mojo and my passions. And hope we can talk again some day soon - really had a blast!

Winner of the Monthly Sketch Giveaway of May 2012

This month was quite a great month for Mojo. The traffic went through the roof and the comments were the most since the start of the Monthly Sketch Giveaway. It also feels like I somehow have found the right niche to make jokes about... and it feels like my art has found a solid ground. Ben has his new looks and I'm loving it. And also the drawing process really suits me.

So let's talk business. This month we've had 63 comments, made by 22 commenters. So let's now pick a winner for this months Sketch Giveaway. I only received one number (thanks Saeed), so I had to punch in some random numbers myself to the equation. The numbers used are 12, 23, 1214, 1279 and 17. Add them all together and you'll get 2545. Next step is calculating the remainder and that will determain the winner. 2545 mod 63 = 25. So the 25th commenter will be the winner of this months Sketch Give Away. And the winner is…

Congratulations Frank. Please send me your address and let me know what character(s) you'd like to see in your sketch.

For all the other people, thank you for your comments. Really appreciate your effort and know that next month there will be another winner.