Are you still there?

Yes, I'm still here. Pretty busy with our new born son Tobias, finding our rhythm and a balance between taking care for our son and other stuff (work, cleaning the house and my drawing).

On the Mojo side, I'm thinking hard about what direction to take. I'm working on the redesign for the site, finally want to make the site a little more professional and give it an own look-and-feel. In the new design there will also be some more pages. About the cast, the author, how a comic is made and more. Can't wait to show it to you all... but thinking about delivering it in pieces, so I can add little by little... otherwise you guys will have to wait until it's all 100% finished.

I'm also thinking about the storylines and what direction to take with the strip. For a while I had the feeling I had myself written in a corner, that I couldn't make any other jokes than the ones I made. But I came to the conclusion that I can do almost everything in the Mojo universe. For starters, it's my own comic, so I can do whatever I want. And besides that, I haven't really restricted myself and how the Mojo world looks like. So expect to see some new things soon.

And third but not least, I'm also redefining the way I create the comics. I used to ink the comics with a 0.5 pen, but I recently started to ink with the Pentel Brush Pen and I'm loving it. It's a little harder to work with... but it gives the drawing so much more energy and feeling. I also still want to play a little more with the comic. Maybe draw in a little different style... or do the coloring different. I just need to make it more fun and experiment a little more. That's what I need. The benefit for you guys is that as long as I enjoy it and have fun... you will get new Mojo's twice a week.

Talking about that... I still need to see if I can maintain the twice a week update schedule these first couple of months. But we'll see. I'll do my best and it just has to show.

And to show you guys how a drawing with the Pentel Brush Pen looks like... here's a better look at my squirrel - the one I drew for the Squirrel Club: 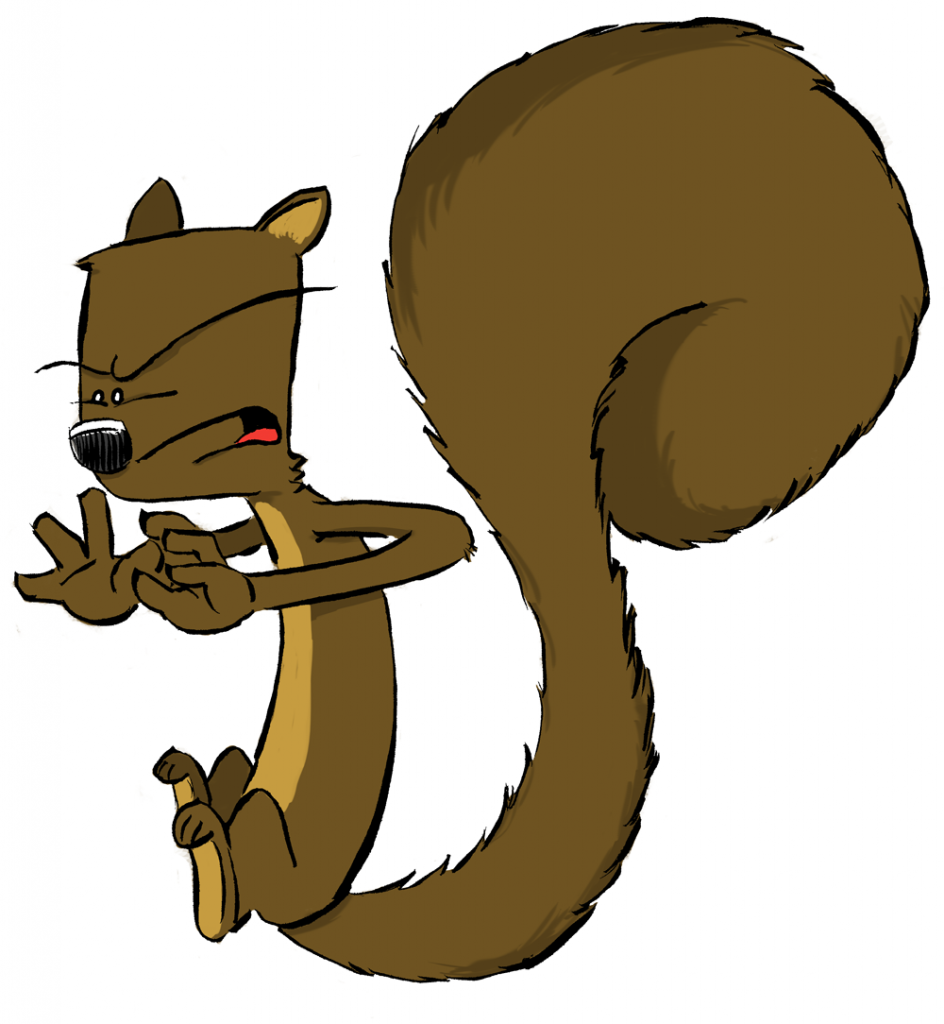 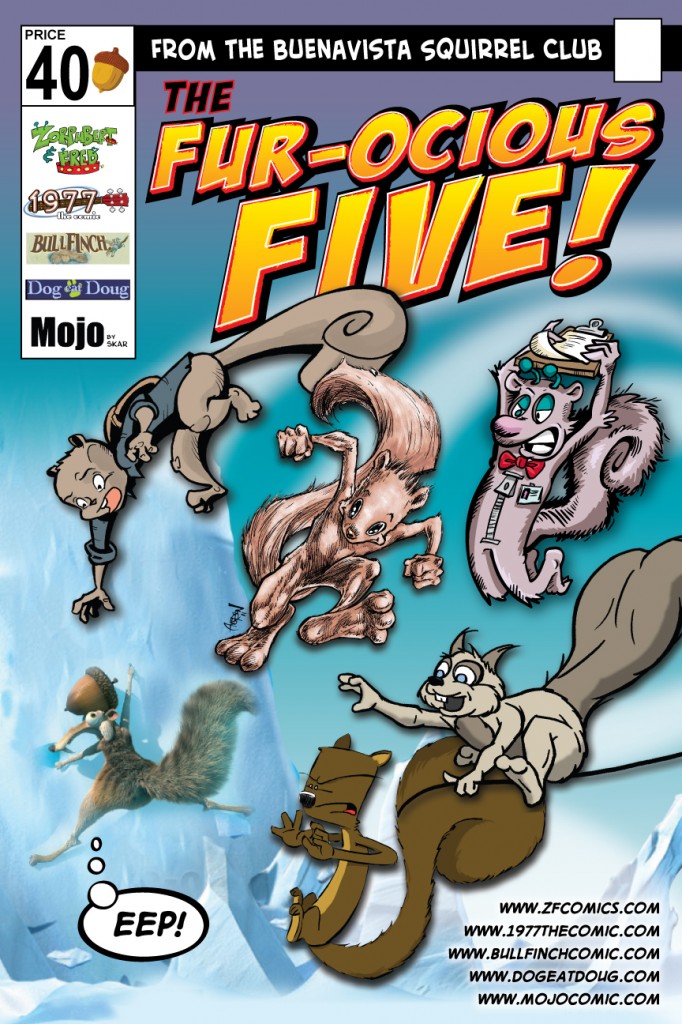 It all began on Twitter. A couple of my webcomic colleagues were talking about their love of squirrels and because I just introduced a squirrel in my storyline, I pitched in.

One thing lead to another and before we knew it, we decided we would create a drawing together of squirrels fighting crime (or chasing nuts or whatever). Everyone drew one squirrel and Dawn put them all together.

Go check out all their comics, because they are all worth checking and funny as hell!

For the writers among you who want to help me with a guest strip (for when my baby is born), I've created a ZIP-file with 14 Mojo comics, but I've stripped out the texts and balloons. So you can add your own texts, balloons or send me what texts you want for what frame and I'll add the text and draw the balloons for you.

Feel free to do whatever you want with the comics, as long as you respect a few basic rules:

- don't kill the characters
- please respect the characters themselves a little
- I will always have the final word if a comic gets placed or not. But don't worry, I'm not that hard to please 😉
- these comics may only be used for this guest strips purposes only - so not for other comics, other projects or anything other non-Mojo related stuff.
- if you have doubts, feel free to contact me any time.

You can send your text (or questions) to: skar[AT]mojocomic[DOT]com

Last Thursday (23rd of december) I got married. After that we had a mini-honeymoon, so last Monday there was a gueststrip created by Brad.

Our wedding was awesome. I'll post some photos when we have some, but here you can see us as the happy couple: 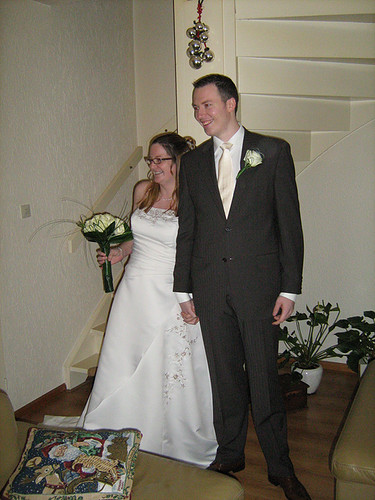 The day couldn't be any better. We started with just having lunch with our closests friends and family. After that we went to City Hall of Dordrecht and there we had our official ceremony. After that we were married and went to have our reception. The reception only took about 2 hours, so after that we went - with the small group of friends and family - to the restaurant where we had our diner and spend the rest of the evening having fun, telling stories and singing songs.

It was awesome! We are so happy with how the day went, we had the feeling everyone could just act like they normally would and the day really flew by.

The next day we went to a cottage and spend our honeymoon (and Christmas) there, in the snow and with squirrels in front of our window. It was lovely.

My wife (still have to get used to not saying 'my girlfriend') had to get back to her work, but I still have a couple of days off (until the 3rd of January). So for this week I had a lot planned. Doing some chores in the house (painting, organizing stuff and catching up with some other things). And I also wanted to do some work for Mojo: tweaking the site, creating some comics in advance (to have a buffer for when the baby is born) and also creating some 'empty comics' so people (writers) could create gueststrips for me as well.

But it's already Wednesday and I'm too busy with doing the things in the house, I haven't even got the time to create todays Mojo. So tomorrows comic will be a little later than usual. But to keep you guys entertained, here is some fan-art Brad created.

Thanks Brad, this gives me some more time to work on tomorrows comic 🙂 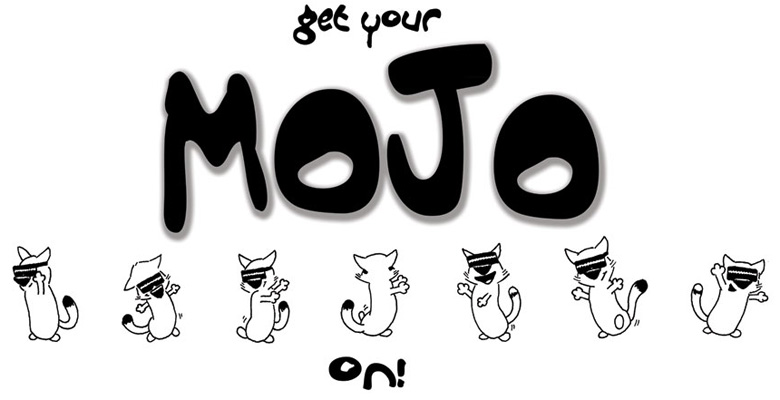 Since my post about the gueststrips yesterday, I've got some awesome responses already. A few guys already started on creating a guest strip, a few notified me that they will be contributing and I got some responses from people who are more the writing kind of person.

To help these people out I will create a couple of 'empty' strips (with no text or balloons). The writers can pick one (or more) from those and write joke(s) for it. I will add the text and balloons in the given strip.

I'll try to have these 'template strips' finished before the end of the year... so you guys (the writers) have enough time to prepare some awesome guest strips.

For more information about the guest strips, check the post directly below!