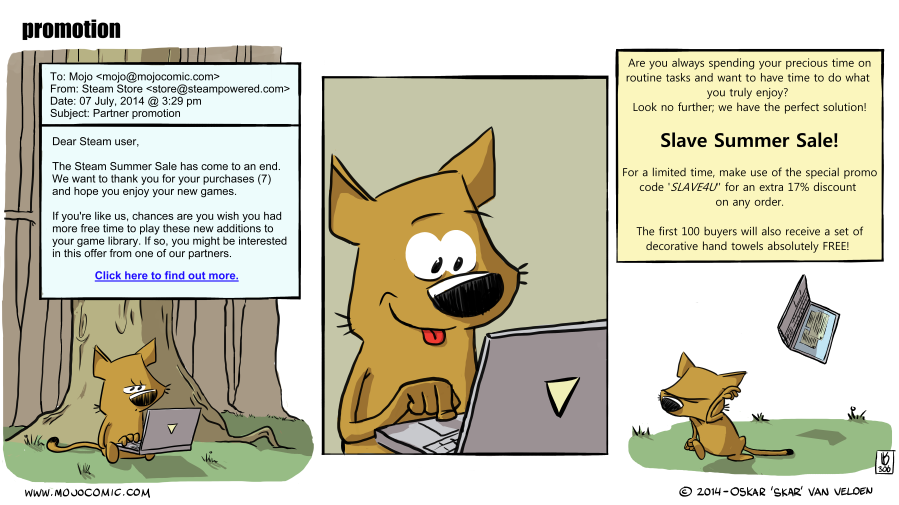 A week ago the Steam Summer Sale ended and for those 2 weeks it was my daily destination. Multiple times a day I checked the store front, to see what the flash sales were, to vote on the community picks and to wonder if I should buy or skip the games with the huge discount.

Eventually I bought a total of 6 games, most of them I wanted for a long time already. A few were (in hindsight, obvious) bad, impulsive buys.

Luftrausers is great, I can really recommend that game to anyone who's in for an awesome arcade 'shooter'. It plays awesome and has the distinct workmanship of the guys of Vlambeer. I play it now often during my lunch-breaks at work and already a few colleagues came by to ask me what game it was, since it looked and plays so awesome.

The other games I bought where the second season of Walking Dead (first season was a nice game to play, so having my hopes up for the second season), Risk of Rain (a rogue-like game, plays awesome, but haven't touched it anymore after the first hours), Dishonored (seems to be a great game, but not sure I will even start it once to be honest), Steamworld Dig (looked cool a while ago and heard nice things about it) and State of Decay (wanted that game since fall last year and now it was very cheap).

Ok, to be honest. I did remember I bought Luftrausers and the second season of Walking Dead. But the other games, ALL of them, I had to look up in my mail to see what games I actually bought. Sigh. Steam Sales are killing for your wallet, if you are as impulsive as me 😛

About the comic, I tried to add some shading again. And I worked longer on the whole drawing, so imho the poses of Mojo match better what they try to convey.